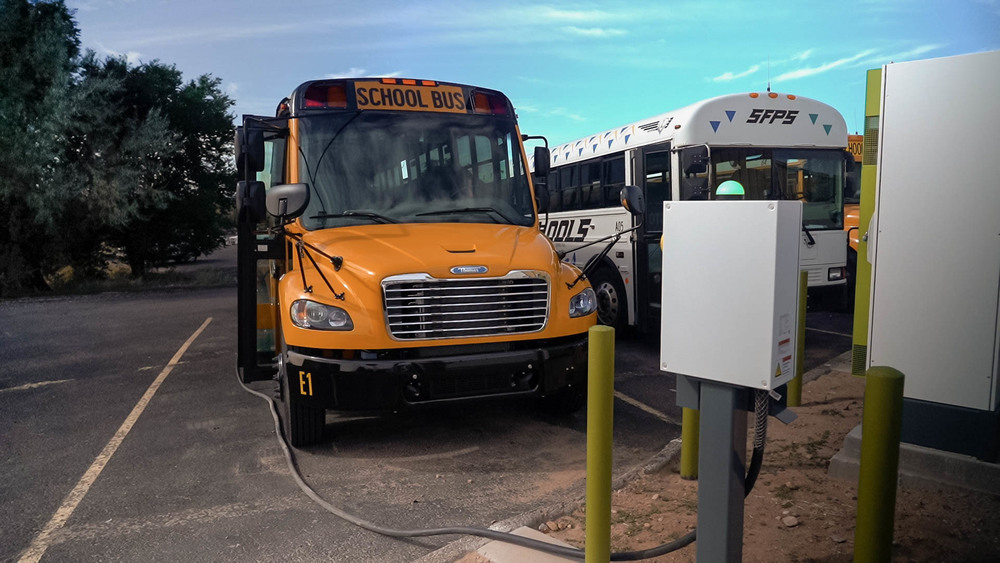 SFPS has been selected by the New Mexico VW Settlement Steering Committee to receive $1,119,987 for the “Santa Fe Public Schools: Electrifying Our School Bus Fleet Project” under its third round of funding.  SFPS was notified of the selection by the New Mexico Environment Department (NMED) on July 8, 2022.  SFPS will purchase three new electric buses with the funds.

“Our move to electric school buses is great for the environment and, most importantly, our students.  Replacing buses that are more than 10 years old and diesel-powered with alternative-fuel buses will result in reduced tailpipe pollution, greenhouse gas emissions and lowered fuel costs. It’s a win-win for everyone,” said Superintendent Hilario “Larry” Chavez.

In November 2020, SFPS announced the addition of an all-electric school bus, funded by the Volkswagen Environmental Mitigation Settlement, and six lower-emission, much quieter propane school buses to its bus fleet.  They replaced older, inefficient diesel buses, which were retired.

“SFPS will continue to seek alternative fuel options for transportation in an effort to reduce air pollutants in our community and create a healthier ride to and from school for our students,” Superintendent Chavez said.

This shift to electric vehicles is part of the district’s successful Sustainability Program, with a focus on renewable energy and water and energy efficiency.

According to the NMED, approximately $7.3 million from the VW Settlement was included for its third round of funding, which was designated for diesel emission reduction projects throughout New Mexico, with a preference for hydrogen fuel cell engine and vehicle replacements.